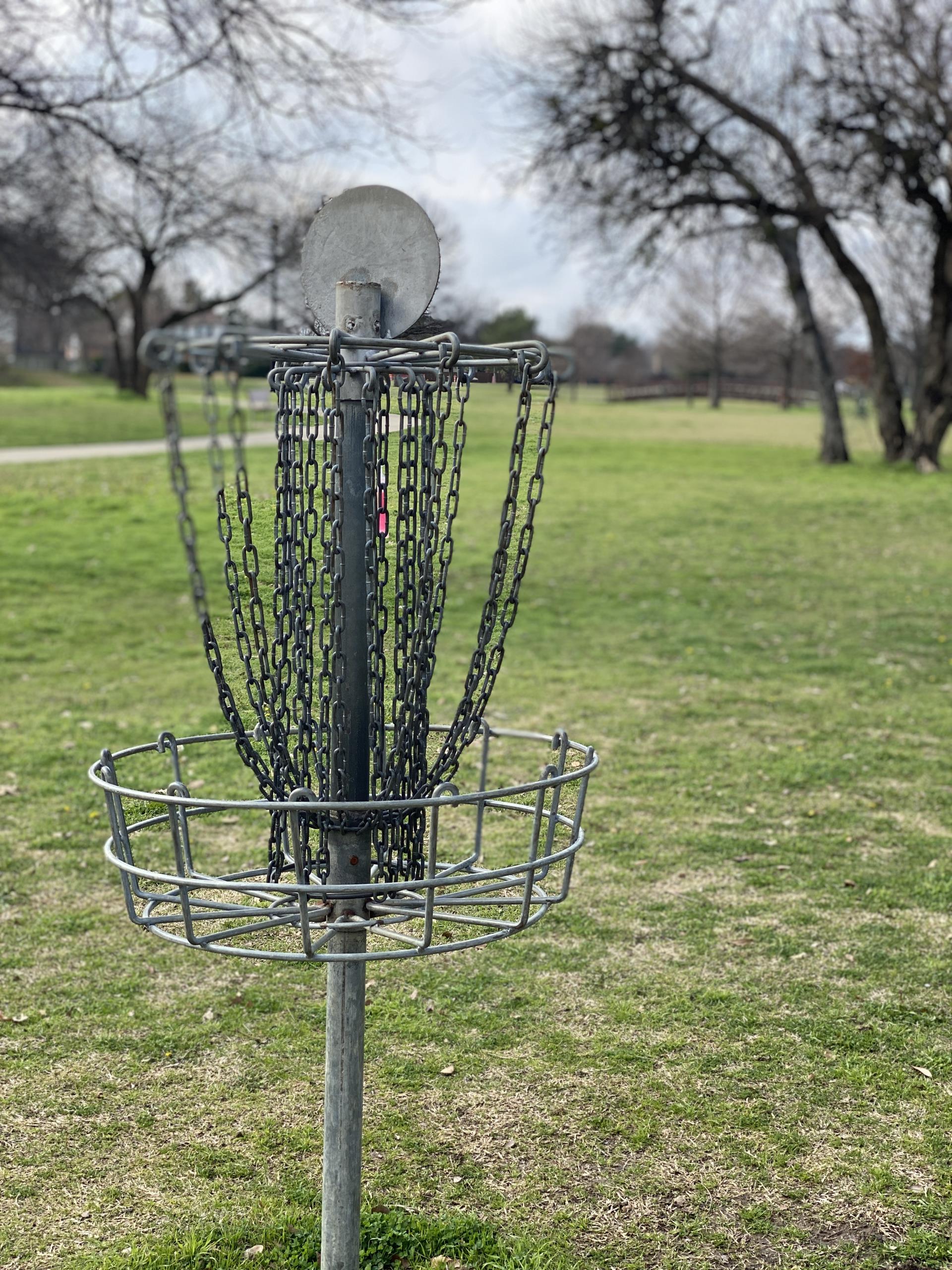 The second course is located at Lewisville Lake Park.The Tom "Old Man" McCutcheon Disc Golf Course is named after Tom McCutcheon who is credited with bringing disk golf the the Lewisville area.

There are no fees to play the disc golf courses. Please note alcohol is not permitted and pets must remain on a leash at all times.

Curious about what disc golf is?

When you're trying to tell friends about your passion for disc golf, they will grasp the concept more quickly if you use the term 'frisbee golf' instead. So why isn't the game called frisbee golf? "Frisbee" is a registered trademark much like "Kleenex" is in the tissue world, so we must call the game 'disc golf' and explain from there. Oddly enough, the company which produces Frisbee toys makes very few golf discs.

Disc golf is a lot like traditional "ball" golf, except players use specially made plastic flying discs instead of balls and clubs, and throw them for 'par' at an above-ground target instead of a hole in the ground. There are different types of discs used for different purposes, much like ball golfers use different clubs.

The object of the game is to throw a golf disc into the target, typically a "Pole Hole®" basket (a steel basket over which chains hang), in the fewest number of throws. The player begins by 'driving' from a designated tee area and continues toward the target, throwing each consecutive shot from the spot where the previous throw has landed. Finally, a successful 'putt' sends the disc into the target. The most satisfying sound a disc golfer can hear is the 'ching!' of a disc crashing the chains before dropping into the basket.

Most disc golf courses consist of 18 or 24 holes, and you'll find some nine-hole courses too. Holes lengths vary, but generally fall between 150 and 500 feet each. Trees, shrubbery, water and terrain changes offer plenty of hazards to avoid, and it becomes very possible to lose a disc in areas with thick growth, tall trees or (SPLASH!) deep water. Fortunately, at retail prices between $7 and $15, lost discs are more easily replaced than your typical nine-iron.

With the incredible rise in popularity of ball golf, it's no surprise that disc golf is also enjoying a similar -- if proportional -- rise in popularity. Disc golf offers many of the same pleasures: fresh air in a beautiful landscape, the camaraderie of friends, and the challenge and excitement of combining personal skill and speed to project an object toward a target. In addition, disc golfers can feel better about themselves and their environment, knowing that chemical pollutants aren't being used to keep their playing fields looking good, nor do acres of trees need to be clear-cut or wetlands filled in, as is sometimes the case for too many ball golf courses. And perhaps best of all, disc golf is inexpensive. The only equipment you need is a flying disc, and most disc golf courses are located in municipal parks, which admit players for free or charge a minimal fee for daily or yearly access.

Don't expect to see many freestyle discs out on the course. These discs, commonly seen at the beach, will prove to be bulky and lack the distance you'll want for driving. On the other hand, the sharper edges of a golf disc can be very painful if used for a game of catch!

The game draws a friendly, easy-going crowd of 500,000 regular players who welcome and encourage new players. Traditionally dominated by 18 to 54-year-old males, the field of disc golf players has expanded greatly in recent years to include many women and families. Kids love it, it's a cheap date and a great excuse to get a little outdoor exercise. Bottom line: disc golf can be big fun for everyone regardless of age, gender or economic status.

Information on Lewisville tournaments can be found at Dynamic Discs.